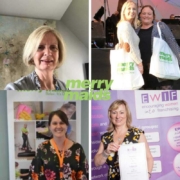 The Merry Maids network includes many brilliant women who manage professional domestic cleaning businesses across the UK. Each one of them brings something different. Be that previous experiences that have led them to where they are now or a unique outlook that helps them run a successful business.

Sue Smith has owned Merry Maids Tyneside for 28 years now. Before this, she worked in payroll for Safeway’s. But with a young son aged three, Sue wanted to have her own business to manage her own time and childcare. Merry Maids “was the perfect solution”, as Sue liked to clean and was able to incorporate this into her job.

Though she found Merry Maids and thought it was just right for her, Sue still had her reservations. She was concerned that she was not the right sort of person to run a hands-on business, as she felt as though she lacked the confidence. “I remember when I had to do the first callout it was terrifying.”

But Sue found that she could do it, and has become confident running her business “I think the more you do it, the more you get used to it. If you push yourself, you can do these things, even when you think you can’t,” she says.

Sue has found also herself becoming more and more involved with the local community and developing long-lasting relationships with clients. “We’ve had some customers for years. I like dealing with it. Especially the older people that have always kept a nice house, and are now finding it difficult to do. I think you get more satisfaction out of that kind of clean – when they’re so grateful for the difference you can make to their home.”

Nicky Morris also started her Merry Maids business around 20 years ago when looking for a fresh start. This coincided with her husband changing careers, having been in the military, and with the two of them moving to a completely different part of the country with a young child. Having spent most of her career “in the corporate world”, Nicky wanted something new, for herself. So, she did a lot of research into franchises, and having spoken to previous Merry Maids franchise owners, found that she was happiest with the brand and company. There was also the question of timing around her move, but ServiceMaster (Merry Maid’s parent company) were happy to hold the business until Nicky was ready. This meant that when her move was completed Nicky was able to undertake her Merry Maids training academy and “hit the ground running after that.”

Though she’s had to put in lots of hard work, Nicky has found running her own business to be worth the challenge:

“It’s very rewarding to see what I’ve built up from nothing. When you initially start, like any business, you have to give it your all 24/7. Especially for the first couple of years. And moving to a new area with a young child was pretty difficult. On the other hand, being my own boss gave me a bit of flexibility. It is your baby, really having a business and building it up. It is blood, sweat and tears that you’ve put into it. So, it is different to a normal job. However much you might like the company you work for, it is very different. When it’s your business, you do have an emotional attachment to it as well. But it’s worth it.”

Helen Bielby has a personal history with ServiceMaster and Merry Maids. Back in the early 80s, both of Helen’s parents worked in engineering and were made redundant around the same time. So, they decided to pool their redundancy money and buy a ServiceMaster franchise – which used to involve our disaster restoration and clean brands under one umbrella. The business stayed a family affair, with Helen and her nan helping out doing the cleaning. Her dad ran to the physical side of the business, whilst her mum handled the running and operation. Then, in 1999, Helen’s mum decided that she wanted to buy a Merry Maids franchise as well. At the time, Helen was at university and would still help out with the cleaning on her break days, and after university, she would help with the books alongside her job. When Helen’s mum passed away suddenly in 2010, Helen had to handle both businesses:

“There was a point where we didn’t have any of the passwords to get into the ServiceMaster system. And ServiceMaster were great, and they sent people down from head office to help us get it all because we had to keep going. And we had staff that we employed, we couldn’t close. So, you know, it was a nightmare, to be honest. I couldn’t run both businesses and have a foot my own full-time job. I could do Merry Maids because I’d done it for such a long time. But we realised we needed a secretary to help my dad do the admin on Service Master.”

They found Becky, “who was working part-time as in conveyancing at a solicitor’s office. She had just had her hours reduced, and she was looking for something to make them up. We met, and we hit it off from the start, we became best friends very, very quickly. It let me get on with concentrating on Merry Maids, but because they were run from the same office in the same room, she would help me out with Merry Maids as well, which was huge for me.”

When Helen’s dad then decided he wanted to sell the Merry Maids, business, he suggested that Helen and Becky take it over together. They have now been running it for the last 12 years alongside working other jobs and both having young children. Though this has been difficult to manage, especially during COVID-19, the pair have been able to lean on each other and be at the forefront of making changes within the business to tackle whatever problems come their way. Helen and Becky have needed to be adaptable and able to work under enormous pressure, but have been able to manage it together.

Beccy Pope’s journey into the world of franchising was completely unplanned. She began her working life as a student with the goal of teaching. But, whilst working three jobs Beccy realised she preferred to earn money. So, she made a leap of faith, taking a job in the forensics industry doing finance and admin. After building this business from the ground up along with the owner, she was headhunted as an Operations Director selling military software. These two roles gave Beccy a good sense of the processes involved in running a company, and she found she loved building a business and running it how she wanted.

In 2017, Beccy had her daughter Isabelle and was faced with a choice as she was worried she was missing out on too much of her daughter’s early life due to the job she was in.

So, in August 2019, Beccy purchased Merry Maid’s North Sussex. Though she faced some difficulties during the COVID-19 pandemic, alongside the birth of her son Finley, Beccy is now be both the businesswoman and mum she wants.

“I can be the mum I want to be, and I have the work that I enjoy. I love going and meeting people. I met a mum a little while ago who just wanted us to go and hoover her floors and mop them because she couldn’t find the time. And that’s real life, isn’t it? My team leader Alex, she’s also got two little boys, and between us: We’re sailing this ship.”

As the newest of these women to the Merry Maids franchise, Beccy says she has received invaluable help and support from the other women in the network like Nicky and Helen. Who have helped Beccy with various things during the setup of her business, even though online during the pandemic:

“Helen talked me through how she runs her online shop and was really friendly and positive. She was happy for me to use some of her work if I chose and to call her if I had any problems during or after set up. Nicky has sent me a few letter templates which have saved me a lot of time too. Considering I haven’t even met these ladies, they have been very supportive!”

Beccy is soon to be starting a new YouTube channel called Beccy Cleans, which will concentrate on Beccy running her business, looking after her family and lots of useful cleaning tips.

As a leading British franchise, people are at the heart of what we do. The women of Merry Maids have each brought unique contributions to our franchise network. This month is all about celebrating them and shedding light on what they do. So, we hope you have enjoyed learning a little more about the women that make up the Merry Maid’s network.