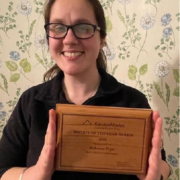 Beccy with her award for Merry Maids Rookie of the year, awarded for her exceptional work during the COVID19 pandemic.

Beccy Pope’s journey into the world of franchising was completely unplanned. She began her working life as a student with the goal of teaching. But, whilst working three jobs as a student, Beccy realised she preferred to earn money. A combination of the need to retake a year, and the sudden passing of a close friend then caused Beccy to rethink her life. Having decided she wanted to leave university and earn money for herself, Beccy made a leap of faith and took a job in the forensics industry doing finance and admin. From there, she found herself on the path of a career woman, building said business from the ground up along with the owner. She was then headhunted as an Operations Director selling military software for two-ex military men and did this for a number of years.

Her two financing and admin roles gave Beccy a good sense of the processes involved in running a company. She had become very familiar with the requirements of establishing a good business, and loved building a business and running it how she wanted. She describes the feeling of being in her 20s and finding the fulfilment of being ‘in it’, meeting amazing people, doing work she loved, and being the woman who can “slap her high heels on and stomps across the train station feeling important.”

During this period in her life, she was with her then boyfriend, now husband. “You know,” she says, “We did the whole traditional get married thing and decided we wanted to have children.” And in 2017 Beccy had her daughter Isabelle. Beccy says that it was pretty much immediately after this that she realised she was faced with a choice. She had come up against the reality of a lot of modern women. “I could be the mum that I wanted to be, or the career person that I wanted to be, and nothing in-between. It wasn’t doable to do my job, and be a good mum.” Beccy knew she had to revaluate her options.

It was then that a friend and colleague told her that his father was looking to sell his business. She wouldn’t have to start something new. She met with Ray Topple, who started Merry Maids North Sussex in 1996. Ray was supportive of Beccy stepping across to North Sussex and introduced her to the team. “It just seemed like a really nice bunch of people, a really nice setup,” she says. Beccy was then supported in buying the business by her own dad, who helped her put the money together to make the sale. With a smooth sale done, Beccy took over Merry Maids North Sussex in August 2019.

“And then the pandemic hit.”

Though Beccy says she was lucky to not lose anyone in the pandemic, she struggled with managing a new business alongside the birth of her son Finley. Though through this now, she said she’s now found herself in the place she wanted to be in:

“I can be the mum I want to be, and I have the work that I enjoy. I like dealing with the staff, and I still get to go out and meet people. It still feels like the best part of my jobs, but in a more local, community setting. I love going and meeting people. I met a mum a little while ago who just wanted us to go and hoover her floors and mop them because she couldn’t find time. And that’s real life isn’t it? Forensic software is all very exciting, and it’s cool, but it’s not the part of my life that I’m in. And my team leader Alex, she’s got two little boys, and between us: We’re sailing this ship.”

Together with her team, and her husband, who also runs his own business, Beccy has found a better quality of life. The work life-balance afforded by Merry Maids, and the systems in place mean customer inquiries can be seen to without becoming all consuming. Beccy can live the life she wants, as part of a partnership she wants, to be the woman she wants.

If you liked Beccy’s story and want to follow her journey, check out her YouTube channel: ‘Beccy Cleans’.