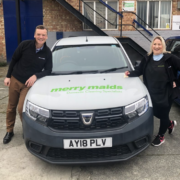 How the owner of Merry Maids Bromley is settling into his new business.

Richard, who is originally from Dublin, has lived in the UK since 1997. With a work background in the hospitality industry, Richard spent several years working in hotels and restaurants, before transitioning into work in the security industry for the past 20 years. When Richard sadly lost both of his parents, he was left with some inheritance, which he was determined to put to good use. But what to do? Of course, security was a number one priority, as was something that allowed flexibility, but how could Richard balance these things with starting something new and potentially risky?

Deciding that he didn’t want to be starting on his own from nothing, Richard turned to franchising. He conducted research into several different franchises in multiple sectors, before deciding that he would like to speak to individual franchisees, with the hope of receiving full transparency from business owners with franchise experience. Based on his research, and the testimony of existing franchisees, Richard says Merry Maids and ServiceMaster came up top. He says this was primarily due to one resounding experience of all of the Merry Maid’s franchisees: the amount of support offered by ServiceMaster as a franchisor.

“With a lot of the franchises I was looking at, I was told who to phone to get some answers. But ServiceMaster said just ‘phone who you like, it doesn’t matter to us.’ So, I just picked random Merry Maids up and down the country. But they all said the same thing, which was about the level of support they get from the head office and they’re not left by themselves. And it’s that’s what I needed because it’s my first business.”

Richard says he was then sold on Merry Maids due to his recognition of the brand, and the clear demand for quality cleaning services.

“Trying to get a cleaner these days is like trying to find gold dust. So, I already knew that the demand was there and that there were a lot of independent new businesses that had been set up in the local area quite quickly, and as quick as they’d set up they’d be gone. I knew Merry Maids had a good reputation in the area, so I spoke to Merry Maids Kingston, which isn’t too far from where I live, and they already had a great presence in the area.”

Two months in, Richard says his favourite thing so far is the relationships he ends up building with customers, and being part of the ServiceMaster network.

“Because the girls all work for us, that’s quite a big selling point when we go out and sell the quotes: that the girls work for us. There’s no cash in hand there’s the insurance as well. Everything’s done correctly and above board. And with an agency, you don’t know who you’re getting. I find that the customers like that they know who’s going to turn up. Security-wise it’s good for the customer as well, it is reassuring. [Because they have that relationship and trust] the customer doesn’t need to be ‘in’ either, we can hold onto their keys and it’s nice that customers feel comfortable enough to give us their front door key. I think seeing the girls go out happy and doing a good job, then getting good feedback from customers, that’s what’s most rewarding. And I think going out and getting the variety of different sized houses that we see from different customers, that’s interesting. And also, I think understanding customers, some of them are quite old and the need. It’s not a hard sell with us. We’ll go out and chat with them about normal stuff. I like the fact that it’s a very people and sales business. And the flexibility as well, that because of Donna the amazing manager, and things of that in the office, I don’t always have to be here constantly and get the flexibility just to be at home as well.

I think the best thing about being with Merry Maids is the overall professionalism of the brand and the fact that we can link in with other ServiceMaster services: restoration, carpet cleaning, and the TruGreen [lawncare] brand. We can do everything for a customer. So, I’ve found that when I’m doing quotes a customer will say, “Oh, do you do carpet cleaning?” And I’ll say, “Well, we don’t, but ServiceMaster Clean does, so I can link in with them for you.’ We’ve got enough variations in the franchise that we can help a customer as pretty much a one-stop-shop.”

Now, as a Merry Maids franchisee, Richard says he can fully appreciate the support from the rest of the Merry Maids network:

“Rather than just doing something on my own business-wise, with no support, no help around health and safety, no help around marketing. It just makes it a lot easier when you can pick up the phone and speak to somebody in the relevant department and get the voice that you need for the help you want. I like the fact that I can speak to my neighbouring franchisees as well. If I’m not too sure, there’ll be someone who will have been doing it a lot longer than me so I can ask for advice on things as well. I can put something on the WhatsApp group and say “Does anyone know the answer to this question?” And usually, someone has experienced it because they probably went through it ten years ago.”

Right from the beginning, Richard has felt supported in taking over Merry Maids Bromley, from both the existing team and ServiceMaster head office.

“I was very lucky that was a very good manager in the office already, Donna, who was able to support me. But also, with the brand manager, Vikki, who was on the phone with me most days, to see if I was OK and what I needed. Then again with the support of the other franchises.”

Richard says all of this made him feel secure that he was doing the right thing with his parent’s inheritance. He also says that being a Merry Maids business owner has allowed him to strike a good balance between learning new things using his previous work skills, such as his ability to communicate with customers to assess their needs. The things he wasn’t familiar with, like TNL and bookkeeping, need not be a worry either, as he has been able to receive help with his bookkeeping through another ServiceMaster franchise, Rosemary Bookkeeping. Due to being a ServiceMaster franchise, the Rosemary team understands the specifics of Richard’s operation and the Merry Maids franchise – making even the unknown simple and stress-free.

Confident he’s made the right decision with his parent’s money and his future, Richard says owning a Merry Maids business is a no-brainer.

“It’s got to be the best franchise to get at the moment because cleaning survived COVID. In fact, it’s busier because people want their places clean. And you know, even though there might be potentially cheaper, independent cleaners, people understand that we’re providing all the right things for our staff. Our welfare is taken care of, all the health and safety taken care of, so it’s properly looked after. In buying at a franchise, Merry Maids has got to be one of the best to get because you’re going to get a return on your investment. After all, it’s cleaning, and everybody needs it. As you get older, you want that, you need a cleaner to help out and some people just don’t have the time because they’re so busy but they want their house to be clean. And we’ve got such a flexible range of options for people that we can package up pretty much everything.”

If, like Richard, you think a Merry Maids business could be right for you, get in touch by filling out a contact form to enquire about available Merry Maids territories today.